There will be no 100-point gloss for the champions. Arsenal produced a stirring display of deep rearguard defence, leavened by two moments of slapstick from the Liverpool backline. It was enough to inflict a third league defeat on Jürgen Klopp’s team, and to provide a most unexpected twist after another piece of defensive frailty had left the red and white shirts a goal down after 20 minutes, and looking once again like a porous unit.

All three first-half goals in this 2-1 Arsenal victory had come from defensive errors triggered by energetic, well-drilled forward pressing. The fact that the two most decisive came from Virgil van Dijk and Alisson was both a surprise and a tribute to the sustained defensive concentration of Mikel Arteta’s team, who will take great heart from this show of resilience. 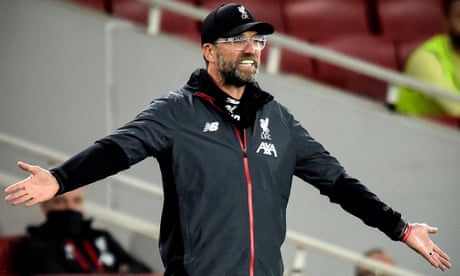 By the end Liverpool had taken 24 shots at goal to Arsenal’s three and spent the second half playing a violently compressed game of all-out attack against desperate but dogged defence.

But Klopp will still be troubled by this defeat. The season may be almost done, a queer zombified thing going through the midsummer motions and Liverpool may have flattened the rest of the field.

But sport never rests, and right now Klopp’s side have lost six and won five of their past 13 games in all competitions, keeping only three clean sheets in the process. The final, final whistle can’t come quickly enough.

Arteta made five changes here, including three to the defensive heart of the team, although as ever with this Arsenal incarnation, the word ‘defensive’ came with a string of shrill advisories as the teams kicked off. Klopp played his best available XI, with Alex Oxlade-Chamberlain given the most delicate of returns in this empty north London megabowl.

It was a muggy, slow, slightly frantic start from both teams. There is something particularly draining about the larger grounds right now. The Emirates is a vast, swooping cantilevered thing, host in these lockdown days to a glut of empty air. Early on Arsenal struggled to find any rhythm through midfield, pressed by that hungry black-shirted double line.

With 12 minutes gone the first chance arrived via a mini-blunder from Emiliano Martínez, who went to hammer the ball upfield and saw his clearance blocked on to the outside of a post by a flying Roberto Firmino. It is still surprising how, week after week, the people most surprised by the Arsenal defence are still the Arsenal defence.

The opening goal came from a similar set-up. Sadio Mané almost charged down another Martínez clearance. His punt was won back easily in midfield. Firmino spun and played in Andy Robertson. The cut-back found an unmarked Mané to score a goal that met little resistance from halfway line to the back of the net.

For a while it looked as though Arsenal would be swallowed up by their own weakness against this kind of pressure, with Firmino as ever a highly-skilled master of the block and the swivel-tackle.

But it was a similarly fine spell of pressing at the other end that brought both Arsenal goals.

With 32 minutes gone Van Dijk was so busy complaining about a minor tug from Reiss Nelson he ended up playing a terrible backpass straight to Alexandre Lacazette, who took the ball past Alisson and rolled it into the net. Van Dijk frowned and pointed and waved his arms. But even the most stately defenders can be hurried.

Just before the interval it was Alisson, too cute by half, who failed to execute a dainty chip out to Robertson from his own goalmouth. Lacazette intercepted and played the ball inside for Nelson to finish neatly. Arsenal had two goals from two shots on target and an unexpected, but well-earned lead.

Liverpool began the second half like a champion team with a flea in its ear. On 50 minutes there was an almighty scramble in the Arsenal box, with four thumped close-range shots swallowed up by a series of blocks. 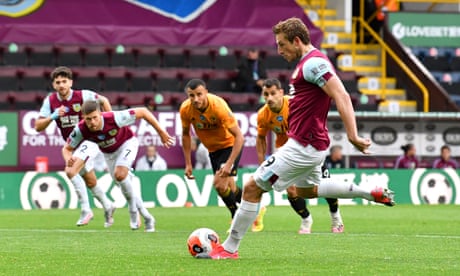 Moments later Mohamed Salah produced a startling switch of feet to elude David Luiz’s lunge, then dinked an imaginatively conceived shot that was palmed over the bar. And for long periods the game was played not just in Arsenal’s half, but in their penalty area.

There was some fine in extremis defending, David Luiz and Rob Holding hurling their bodies into the line. Kieran Tierney and Bukayo Saka did a fine, diligent job of holding the left side together. Only Salah really seemed to have the close-quarter craft needed to forge a clear shot at goal out of a series of urgent but repetitive Liverpool attacks.

There were further chances for Mané and for Salah, and a run of Liverpool corners in added time. But somehow that red and white line never quite looked like being breached.