The first commercial flight from Israel to the UAE has landed, marking a major step in normalising relations after the announcement of a peace deal.
The El Al airliner made the three-hour trip, carrying a delegation of Israeli and US officials.
The flight was allowed to cross Saudi Arabian airspace, normally blocked to Israeli air traffic.
The UAE has become only the third Arab country in the Middle East to recognise Israel since its founding in 1948.
On Saturday the UAE repealed a law boycotting Israel which had been in place since 1972, and earlier this month the two countries opened direct telephone services for the first time.
The agreement to normalise relations – brokered by the US – was made public in a surprise announcement on 13 August. 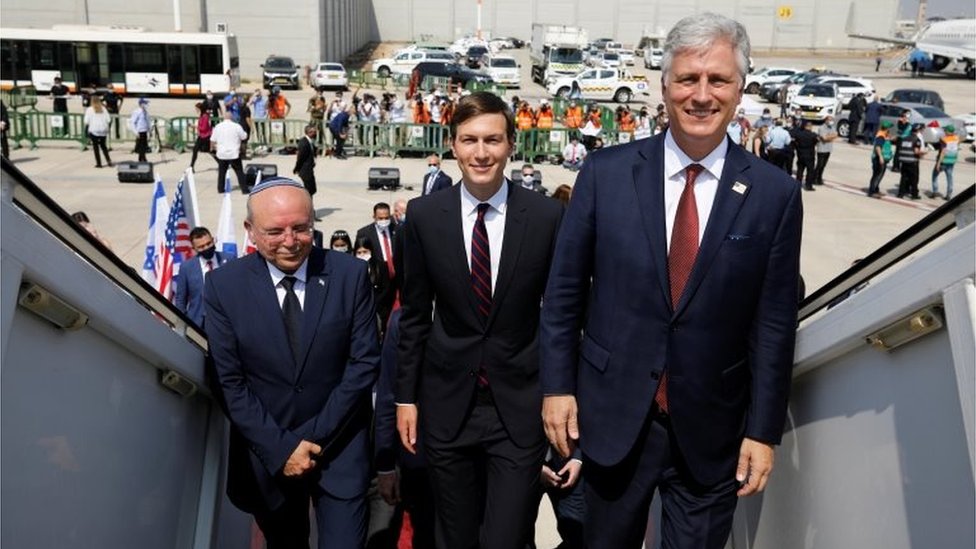 Mr Kushner led secret talks which resulted in the Israel-UAE agreement.
Speaking to the media after landing in Abu Dhabi, Mr Kushner described the deal between the countries as a “historic breakthrough” and said it was a “tremendous honour” to have joined the flight.
“What happened here was three great leaders came together and they started writing a new script for the Middle East. They said the future doesn’t have to be predetermined by the past,” he said
The joint teams will meet Emirati representatives to develop areas of co-operation between Israel and the UAE. The return flight will be numbered LY972, after Israel’s international dialling code.
Monday’s three-hour flight has taken more than 70 years to make, and it marks a new turning point in relations between Israel and the Arab world.
There are big prizes for all three players: Israel’s historic need to boost regional recognition of the Jewish state (could Saudi Arabia one day do so too?); the Emiratis’ glittering finance hubs can benefit from open links with the region’s security and cyber superpower; while a US president under pressure at home gets to tout his role as peacemaker in the Middle East.
These are truly significant achievements and further shift the dynamics in a deeply polarised region. But the deal is striking for another reason – it leaves the Palestinians feeling as sidelined as ever.
They believe it breaks years of Arab solidarity – and leverage – against Israel’s occupation of land they want for a future state; while ordinary Palestinians feel more and more hemmed in as Israeli settler numbers grow.
They see not only betrayal, but a blind eye being turned by the Emiratis to their reality on the ground.
In a tweet in Hebrew, Israeli Prime Minister Benjamin Netanyahu hailed the advent of the flight as an example of “peace for peace” – alluding to his long-held disbelief in the notion that only trading occupied land will bring peace between Israel and Arab countries.
While it was welcomed by much of the international community, the UAE’s recognition of Israel without the precondition of the creation of a Palestinian state was denounced by the Palestinians as a betrayal of their cause.
In return for official relations with the UAE, Mr Netanyahu agreed to suspend controversial plans to annex parts of the occupied West Bank – land claimed by the Palestinians for a future state of their own.
Source: BBC
Via: WWW.EROSFM.COM
Share5Tweet3SendShare
Previous Post