by Eros FM
in Business
0

The BBC’s weekly The Boss series profiles different business leaders from around the world. This week we speak to Kimberlee Perry, founder of trampoline fitness company Bounce.

“You need to connect with other people, it makes you feel good,” says Kimberlee Perry.

Ghana to export banana, others to UK under a tariff-free agreement

Before coronavirus hit, her business had never contemplated running virtual sessions. The whole purpose of its dance classes on trampolines was to physically bring people together, especially new mothers who felt alienated in small towns.

This is what inspired Kimberlee, 35, who is originally from Australia, to start up Bounce six years ago. In 2014, she was on maternity leave, and moved with her husband 30 miles out of London to the Essex town of Harlow. Suffering from postnatal depression she felt lonely.

“All my life I’d really invested in sport, and used it to connect with people,” she says. “It’s a very sporty culture in Australia, so when I originally came to London when I was 18, I joined a netball club to make friends.

“When I moved to Harlow I felt very alienated, I barely knew anyone, and the only sort of clubs I could join were mother and baby ones,” she says.

Kimberlee found there were no fitness classes where she could take her baby, despite the positive impact exercise has on the mental and physical wellbeing of new mothers. So she decided to set up her own, investing £200 to launch Bounce later that year.

“I wanted to feel good about myself – as a new mum you spend hours, most of the day and night on your own. So Bounce became a fusion of everything I needed in my life at the time – fitness, connections and fun.”

Fast forward to before the start of the coronavirus pandemic, and the company had grown to have 47,000 monthly customers – mostly women – across the UK, Australia and New Zealand.

Another factor behind her setting up the business was that she had missed out on a promotion – which she felt was rightly hers – in her previous job working as a sales manager in the events industry.

“Climbing the ladder in my job was a massive priority for me,” she says looking back. “Being in the events industry is tough – you have to be working 24/7 – and I think that my pregnancy contributed to the decision not to take me on for that promotion.

“I was devastated, I spent a few days in bed crying over it, trying to work out what my identity was without this job.”

Kimberlee already had a dance background, and started working hard at quickly getting some fitness instruction qualifications. Soon she was teaching classes at a local gym, where she came up with the specific idea for Bounce.

“I came across these rebounders, which are mini trampolines, and I said to my husband, ‘I’m going to take £200 out of the joint account and buy eight of them,'” she says. “I think he thought I was mad.

“But they’re well known for their low-impact nature, they’re easy on the joints, and absorb over 80% [of impacts] – so I knew they would be perfect for new mums who wanted to work out.” 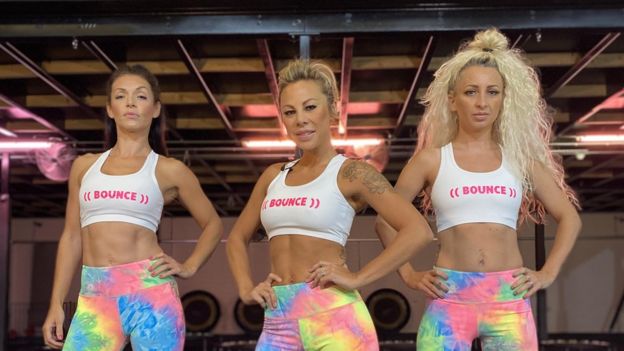 To launch her first classes, Kimberlee choreographed a number of dance-based routines, and hired a local community hall in Harlow.

“Mums would bring their babies and leave them in their prams while they did the class,” she says. “After a few months I started to put on more classes because of demand – people loved the fun nature of the class, and the fact that they could burn around 600 calories in 45 minutes.

“I put all the money back into the business – paying my hire fees for the hall, then buying more trampolines. But it got to the point where I couldn’t teach all the classes myself – I was doing 12 a week and the weight was falling off me.”

Hiring other instructors, Kimberlee’s classes started to get more and more attention – and competitors began to set up similar ones. She knew she wanted to expand the business and protect her idea, so decided to look into franchising.

But Kimberlee is the first to admit that she wasn’t sure how the process even worked. “I didn’t have any understanding of it, but I knew I needed legal protection to support my business idea,” she says.

“So when a lawyer helped explain the franchise model and the possibilities of how big I could take the company, it was so enlightening.”

To date, Kimberlee and her team have trained more than 700 instructors, and now have 320 franchise studios in the UK and 20 abroad. Their franchisees pay an upfront fee to be part of Bounce, which gives them access to the equipment, and a protected geographic area to operate in.

Franchisees then pay a percentage of their revenues as an ongoing management fee. For this fee they get their business admin managed, all the class routines and choreography, plus branding and marketing.

Marc Mullen, a London-based personal trainer, believes Bounce is popular because it is fun and friendly, and offers its predominantly female customers a sense of community.

“Joining a regular gym can be very intimidating for some women, as unfortunately they can be male-dominated environments,” he says. “And there are high rates of gym dropouts due to the fact that people don’t really have a structure to follow, lack of ideas, or motivation.

“[By contrast] Bounce keeps people engaged with that sense of community. The workouts have a fun element to them, they are high energy, and with the creation of the franchise it’s become accessible to more people around the world.”

‘My chronic acne inspired me to start my own skincare company’

Ghana to export banana, others to UK under a tariff-free agreement

'My chronic acne inspired me to start my own skincare company'