We spent the evening getting to know each other… they were gentlemen’: Icelandic beauty queen and her cousin reveal how they met shamed England stars Mason Greenwood and Phil Foden online before hooking up with them in team’s quarantined hotel room

An Icelandic beauty queen and her cousin have revealed how they met England stars Mason Greenwood and Phil Foden online before hooking up with them in the team’s quarantined hotel room.

Model Nadia Sif Lindal Gunnarsdottir, 20, revealed how she had been chatting with young Manchester United star Greenwood, 18, for a ‘couple of days’ before he and fellow England starlet Foden visited Iceland for a Nations League game in Reykjavik.

The Three Lions pair, who both made their England debut in the game against Iceland on Saturday, then sneaked Nadia and her cousin Lara Clausen, a 19-year-old law student, into the team hotel.

She claimed the pair had never even heard of Foden, 20, before the trip – but that the four of them spent the evening getting to know each other and enjoyed a ‘good night’ together.

When asked how close they came to the stars during the evening, Nadia declined to comment and would only say ‘they were perfect gentlemen’.

She told MailOnline: ‘We met online. I was talking to Mason for a couple of days before they came to Iceland. 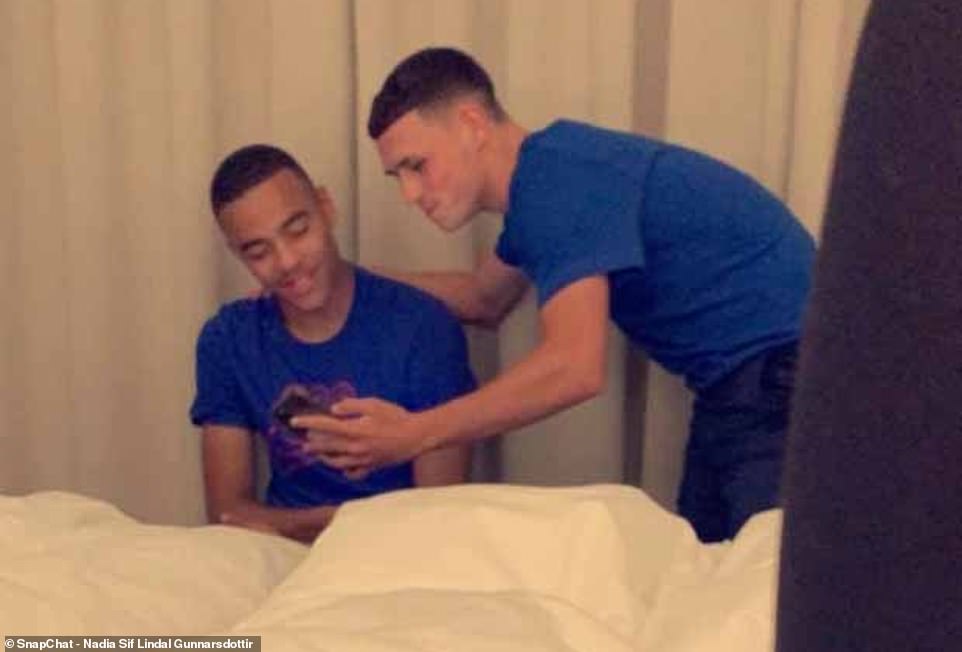 The Icelandic girls, one of whom is 20-year-old model Nadia Sif Lindal Gunnarsdottir (pictured), then ask how the stars are going to sneak them into the hotel 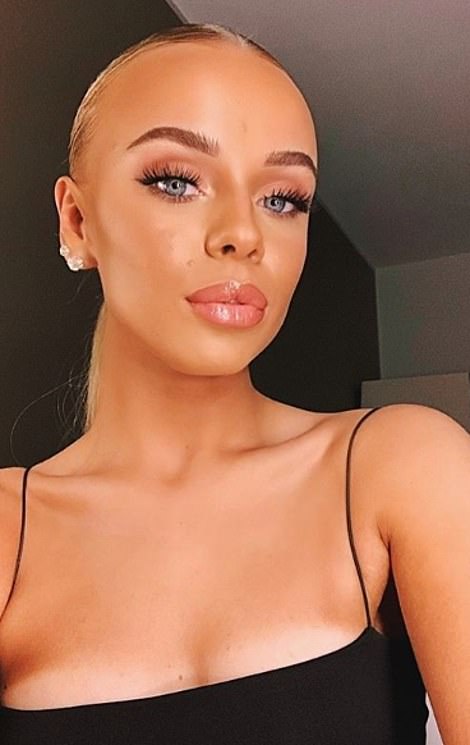 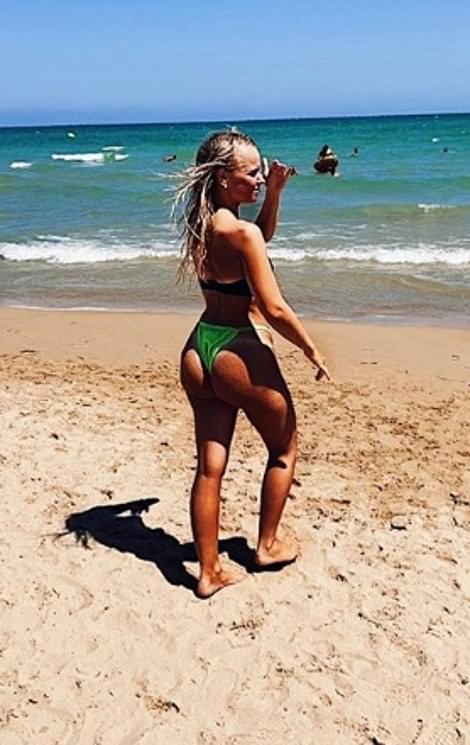 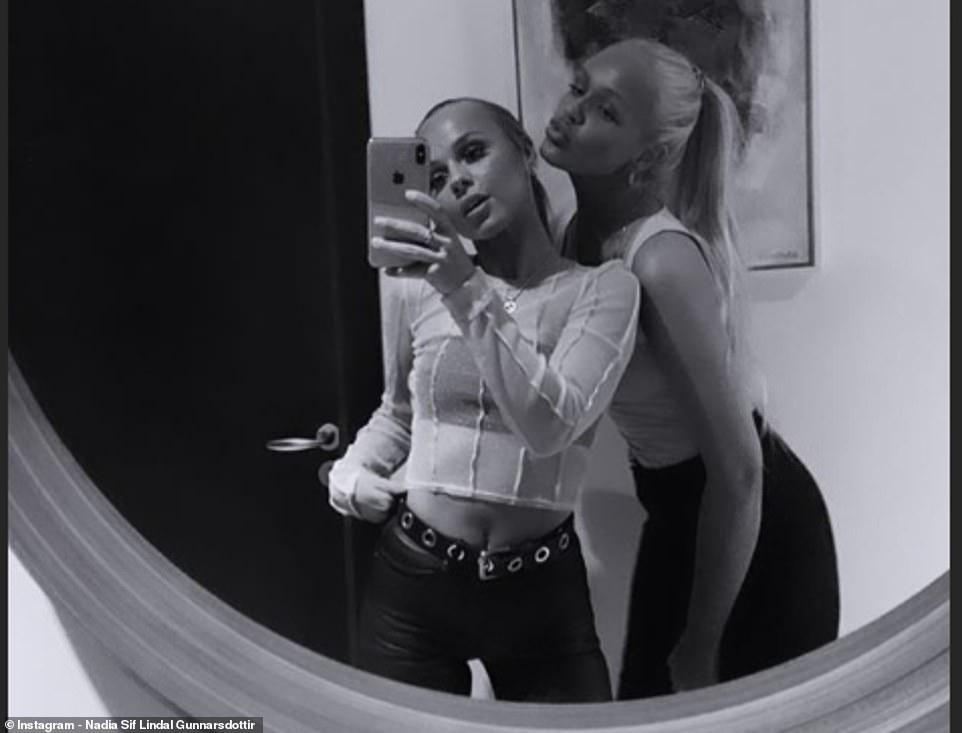 The two girls (Nadia pictured right and her cousin and friend Lara left) pictured on the night they went to the England team’s hotel to meet the young stars, who both made their debuts for the national team against Iceland on Saturday

‘They did know that they had to quarantine, but we figured that since they were playing Iceland, they had been tested before and it would be OK.’

It comes after video revealed how the England stars had engaged in a flirty chat with the Icelandic beauty queen and her friend before the football stars smuggled them into the team hotel.

Video shows the two women talking over the phone to Greenwood and Foden, who are asked by the girls, ‘what do you think,’ when Foden ask why they are coming to the hotel.

They then ask the stars are going to sneak them into the hotel. A later video then shows the footballers in the hotel.

The footage has been revealed hours after England manager Gareth Southgate confirmed the pair had been kicked out of the squad after they were filmed meeting with girls in the team hotel in Iceland – breaking strict coronavirus quarantine rules. 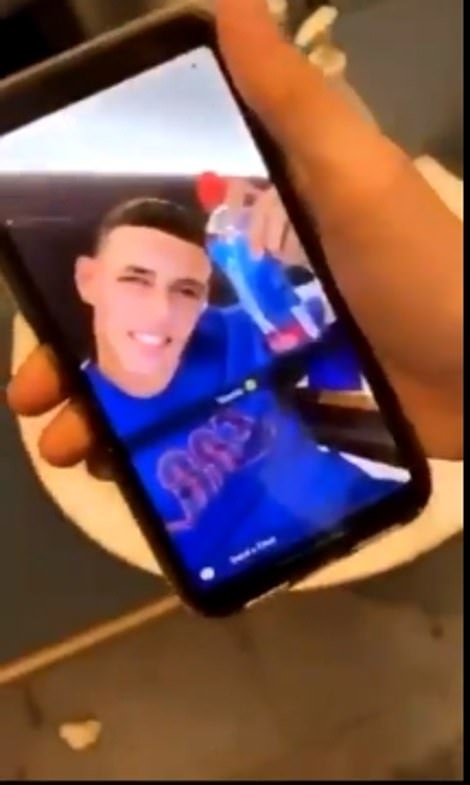 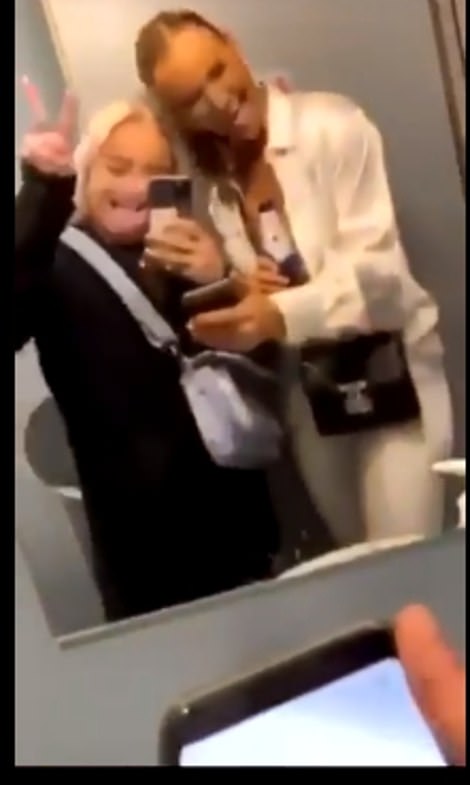 The young stars, who made their debut for England against Iceland on Saturday, will not travel with their team-mates to Denmark today after footage emerged of the pair in a hotel room with the girls.

The conversation between the two girls and the England stars

Foden: ‘Say that again, what was you saying?’

Mason: ‘Depends what you want’

Foden: ‘He says depends what do you want?’

Girl: ‘We can come to the hotel but I don’t know how you’re going to sneak us in’

Foden: ‘What you coming to the hotel for?’

Mason: ‘What do you think?’

Foden: What does she want?’

Girl:(Speaks In Icelandic to her friend)

Mason and Foden: Discussing. Hard to tell what they are saying.

The pair will instead fly home separately from the rest of the England team, back to Manchester.

Today, one of the girls has apologised for her part in the incident, saying she felt ‘really, really, really bad’.

She told MailOnline: ‘I feel really sorry for him and I never wanted to put them in that position but we didn’t know any better and we didn’t know that they were quarantining, or else we wouldn’t have gone to meet them.

‘We didn’t even know who Phil was. I asked Phil who he was. I’m not that much into football. I don’t watch football at all.

‘We didn’t even know that Mason played for Man United.’

She added: ‘We haven’t spoken to them since. We don’t want to interrupt them because they are of course going through a lot right now. They haven’t contacted us.

‘It was a good night that we had, of course. We were all the four of us spending time together and getting to know each other. They were nice guys. Really, really nice.’

Lara added: ‘They were just young. We were all young and stupid and we all make mistakes. They treated us really well. They were such gentlemen. Really nice guys.’

Reports of the hotel meeting came after Greenwood and Foden both made their debuts in England’s 1-0 away win against Iceland in the Nations League on Saturday.

Today, England manager Gareth Southgate confirmed the pair will travel home separately from the rest of the team.

The national team arrived in Iceland having been given an exemption from the country’s quarantine rules, which mean all foreign travellers have to quarantine for 14 days – regardless of how long their stay in the country is.

Instead, Gareth Southgate’s men were banned from meeting anyone outside of their bubble and were only allowed to go to their training facilities and the match while in the country. 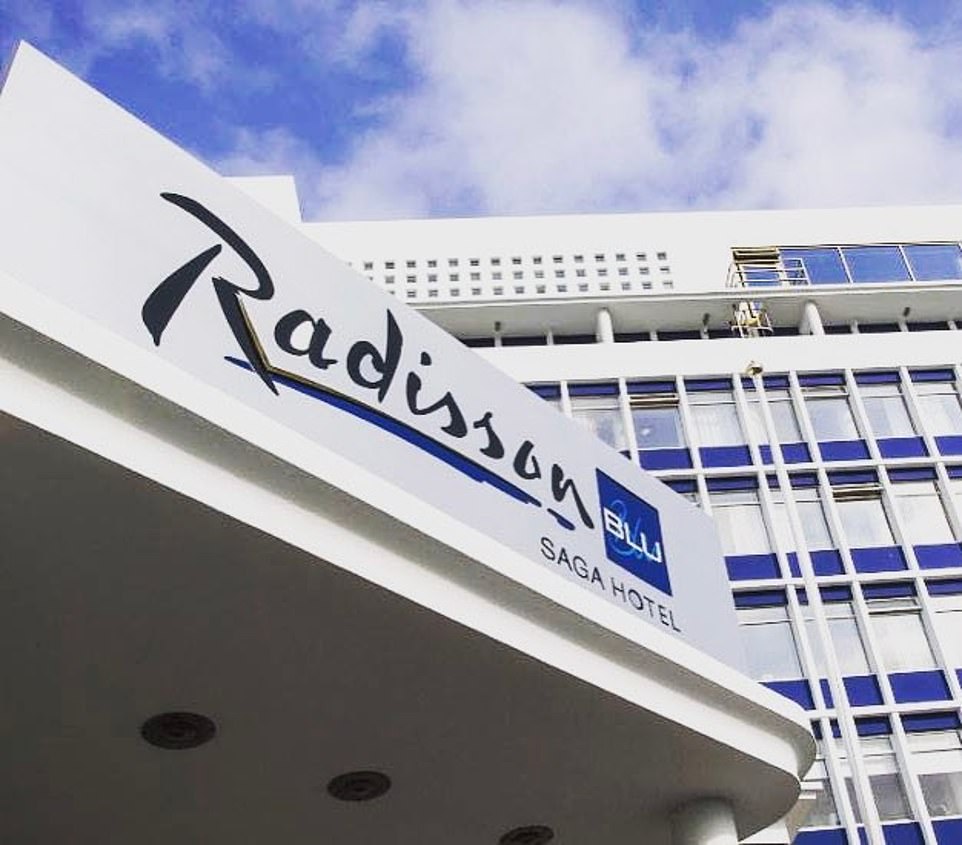 The meeting took place at the Radisson Blu hotel in Reykjavik, Iceland, where the England team were staying. The FA say the incident did not take part in any of the hotel rooms which the team were staying in 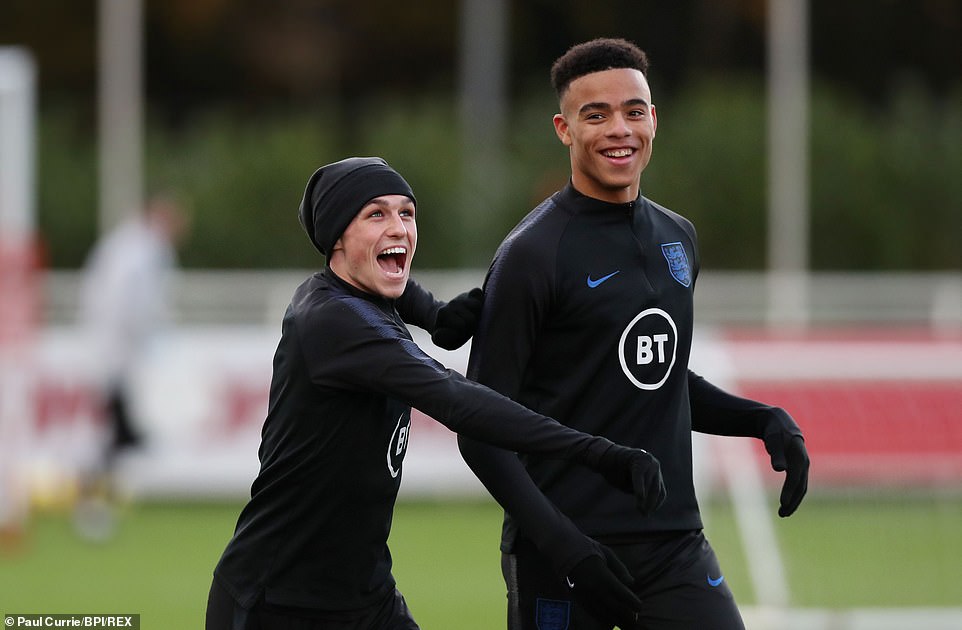 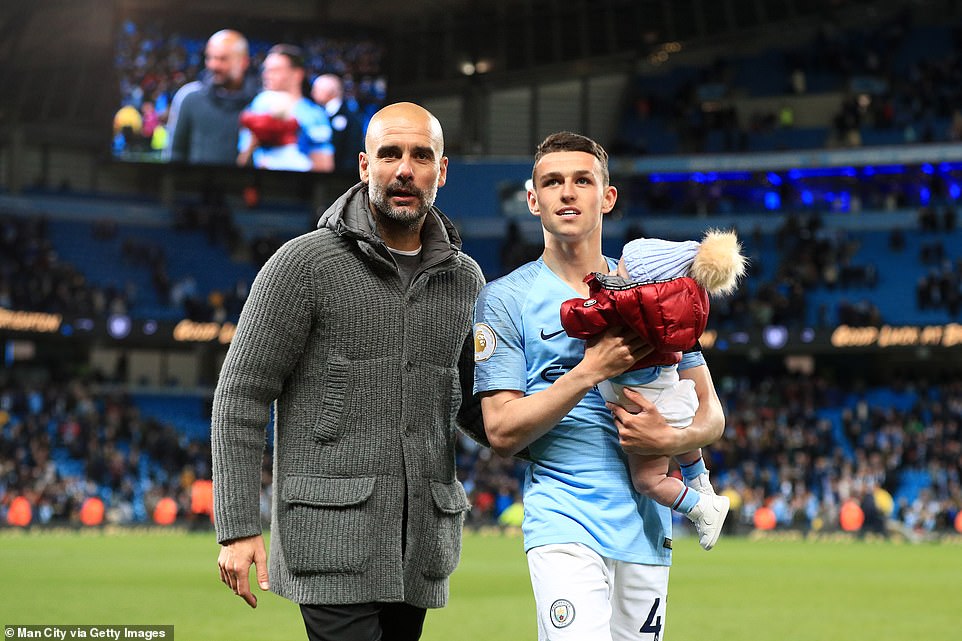 Foden, above with Man City boss Pep Guardiola, has a one-year-old son and a girlfriend who he has been in a long term relationship with.

The pair’s conduct in bringing girls back has also contravened the FA’s behavioural rules for players whilst on international duty.

In the short clip, Foden and Greenwood appear to be wearing their new England training wear and the players are now in hot water with management.

In an interview with DV, one of the girls in the Snapchat video allegedly filmed in the hotel room said: ‘We had no idea about these [Covid-19] rules, they never said we could not take pictures.’

Another girl claimed to have notified the England stars that the pictures were in circulation with a Snapchat message, but ‘they have not opened it’.

She also claimed to have been talking ‘with one of the boys for a few days’.

She said: ‘The only thing I can say is that I had been talking to one of them for a few days. I’m not going to say where.’

Foden has a two-year-old son and a long-term girlfriend, while United star Greenwood broke up with his model girlfriend back in May.

Meanwhile, Greenwood, who starred for Manchester United at the end of the recent Premier League season, came off the bench to achieve the same accolade.

While the pair would have been looking ahead to England’s next fixture against Denmark in Copenhagen on Tuesday night, they will now leave Iceland and return home. 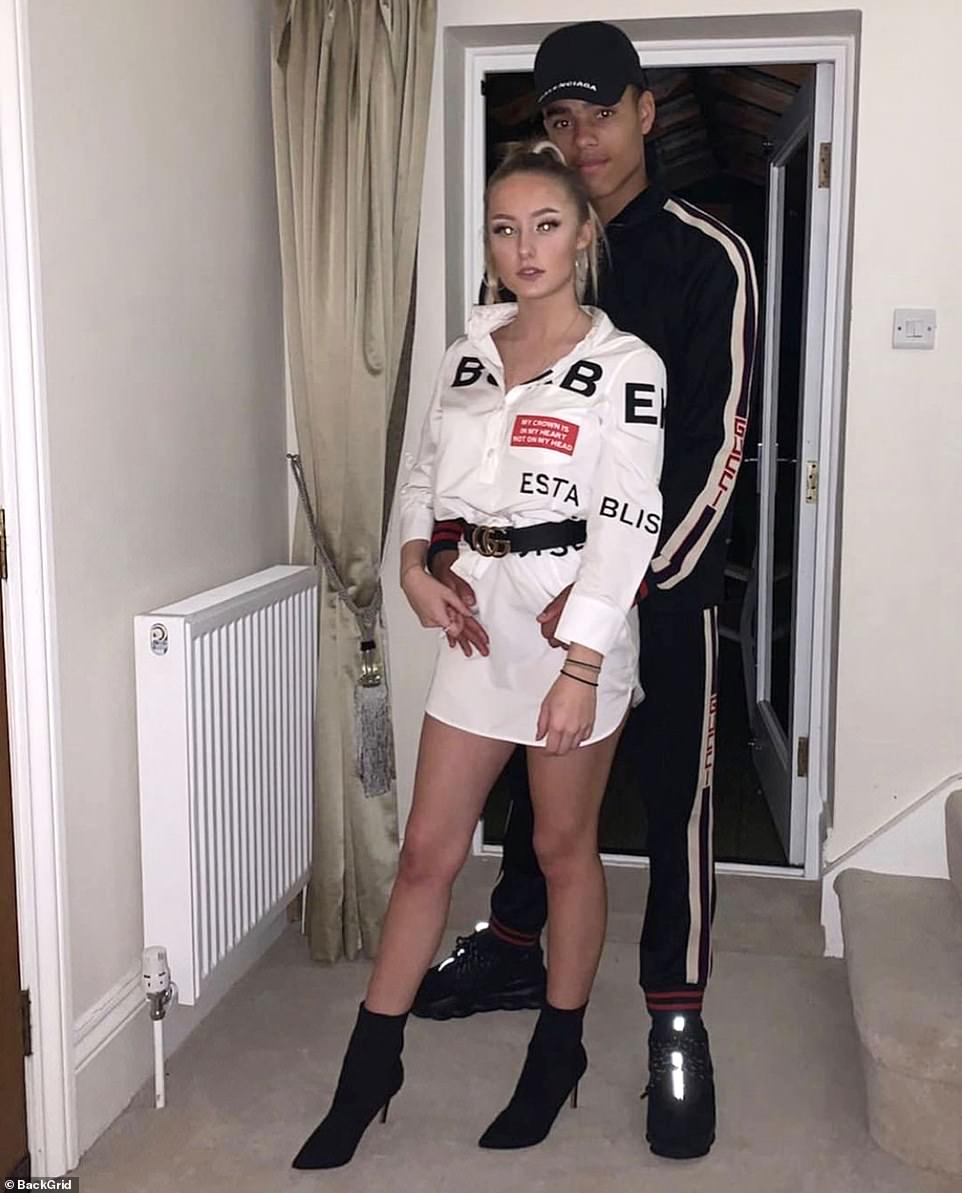 The pair were both absent from England training on Monday and it was then confirmed that they would leave the camp and travel home before the team’s second and final match.

England boss Gareth Southgate today faced the media for a press conference where he discussed the issue.

He said: ‘Two of the boys have broken the Covid-19 guidelines, in terms of our secure bubble.

‘We had to decide very quickly that they couldn’t have any interaction with the rest of the team and wouldn’t be able to train.

Obviously they have been naive. We have dealt with it appropriately. I recognise their age but the whole world is dealing with this pandemic.

‘Now they will have to travel back to England separately.’

He added: ‘Nothing has happened in the areas we occupy in the hotel.’

It has been reported by news outlet DV that the girls did not go into the players’ room, but instead two other rooms had been booked where the could meet the woman, who both reportedly from Iceland.

The news outlet reports that, at first, only one of the woman was going to meet Greenwood, before a friend of hers decided to go with her.

A spokesperson for Greenwood’s club, Manchester United, said they were ‘disappointed’. 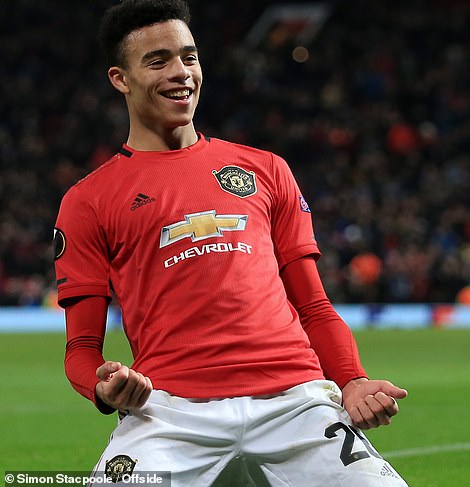 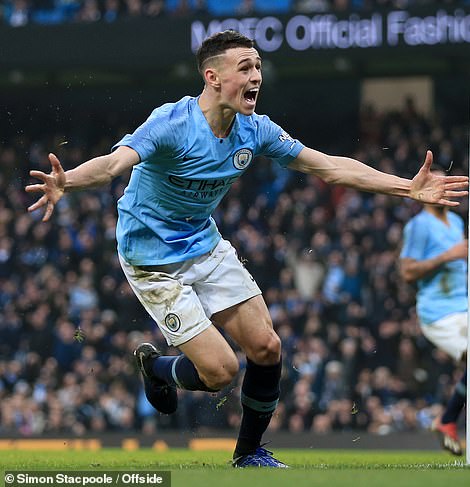 Greenwood (pictured left) is a rising star at Manchester United. The club have called his actions ‘disappointing’. Foden (pictured right) is also highly rated by Manchester City. The club says the player’s actions were ‘totally inappropriate’

The spokesperson said: ‘Manchester United are liaising with the Football Association and are disappointed with the actions of Mason Greenwood over this situation.’

A statement from City read: ‘It is clear that Phil’s actions were totally inappropriate.

‘His behaviour not only directly contravenes strict guidelines related to Covid-19, but also falls well below the standard expected of a Manchester City player and England international.’

A spokesperson for the England national team tonight added: ‘Whilst in Iceland, both Phil Foden and Mason Greenwood spent time outside of our private team area, which was a breach of our COVID-19 rules.

‘While they did not leave the team hotel, it was an unacceptable breach of our protocol. They have both apologised for their serious lack of judgement.

‘The FA will be launching a full investigation into the circumstances leading up to this breach.

‘We have spoken to the Iceland FA to offer our apologies for this incident and to ensure them that we are taking the appropriate steps.

‘We have also assured the Danish FA that all other players and staff members have been isolated within our group throughout this period.

‘Our immediate priority now is preparing the team for the match against Denmark tomorrow.

Receiver to publish names of debtors to collapsed microfinance firms