Arsenal’s Gabon striker Pierre-Emerick Aubameyang, 31, will sign a new three-year deal which will make him the highest paid player at the club. (Athletic – subscription required)

Manchester United’s English defender Chris Smalling, 30, has not been at training this week as he moves closer to a permanent move to Serie A side Roma, where he was on loan last season. (Telegraph – subscription required)

Liverpool midfielder Georginio Wijnaldum, 29, has held positive talks with manager Jurgen Klopp over his future at the club. The Dutchman has just one year left on his contract at Anfield. (Sky Sports)

England and Tottenham defender Danny Rose, 30, is close to leaving the Premier League and moving to Serie A side Genoa.(PA, via Team Talk)

Arsenal’s Argentine goalkeeper Emiliano Martinez, 28, has agreed a four-year deal contract with Aston Villa, worth about £60,000 per week, with the clubs set to agree a transfer fee of more than £15m. (Independent)

Manchester United and Brazil midfielder Fred, 27, has dismissed reports he could leave for Turkish side Galatasaray this summer. (Four Four Two)

He takes on soul singer and Arsenal fan Celeste

Tanzania striker Mbwana Samatta, 27, will be able to leave Aston Villa only eight months after joining the club. (Mail)

Fulham are looking to sign Benfica’s Portuguese midfielder Florentino Luis, 21, on a season-long loan deal with an option to buy for £27m. (Sun)

Porto have rejected a £22m bid from Wolves for winger Jesus Corona. The 27-year-old Mexico international has a £27m release clause in his contract. (Mail) 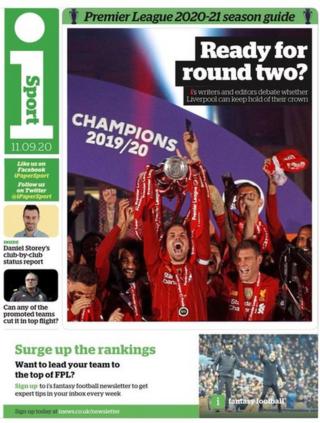 The front page of the I Sport section