Jamie Vardy scored a hat trick as Leicester City thrashed Manchester City 5-2 in the Premier League at the Etihad Stadium on Sunday.

Riyad Mahrez’s thunderbolt opened the scoring in the first half but Vardy’s first penalty of the afternoon leveled the scores just before halftime.
The English striker’s clever flick gave Leicester the lead and he completed his hat trick with another penalty shortly after. James Maddison’s long-range curled effort stretched the lead.
And although Nathan Ake’s header gave Pep Guardiola’s side some hope, Youri Tielemans’ late penalty secured Leicester’s third win from its third game of the 2020 season and moved it to the top of the Premier League table.
“It was a great result,” Vardy said afterward. “We tweaked it tactically today and knowing when we got the ball and played through their press, we would get a few chances and we stuck them all away. We just had to keep believing.
“The main thing was getting the three points and we have done that with a great performance, it’s only the start though we have got to keep going and show that consistently.”
READ: Rose Lavelle and Alex Morgan lead “American invasion” of English football 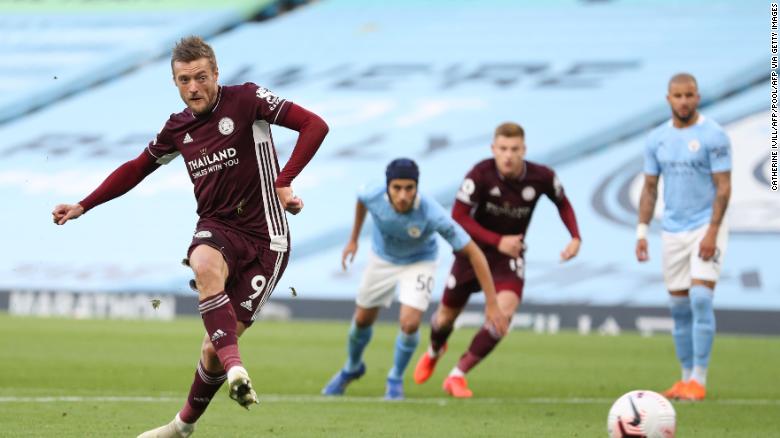 Vardy scores from the penalty spot against Manchester City.

Having opened its 2020 Premier League campaign with a victory last Monday away at Wolverhampton Wanderers after a disappointing exit from last season’s Champions League, Manchester City had hopes of continuing the winning start.
And Mahrez’s right-footed finish into the top corner against his former side had the 2019 Premier League champions in the ascendancy.
But just a few minutes before the halftime break, Kyle Walker’s pullback on Vardy in the penalty area sent the Leicester striker spinning and resulted in a penalty. Vardy, 33, duly converted it.
Last season’s top scorer had his second of the day after his cheeky backheel from Timothy Castagne’s low cross flicked just over goalkeeper Ederson.
And the hat trick was completed when Vardy converted his second penalty of the afternoon after he was fouled by Spanish defender Eric Garcia.
Leicester’s lead was further extended thanks to Maddison’s curling, 25-yard strike into the top corner but Ake’s first Manchester City goal offered it a glimmer of hope.
But just four minutes later, the result was wrapped up as Tielemans scored Leicester’s third penalty of the game after Maddison was pulled back by Benjamin Mendy. Leicester became the first side in Premier League history to score three goals from the penalty spot in a single game. 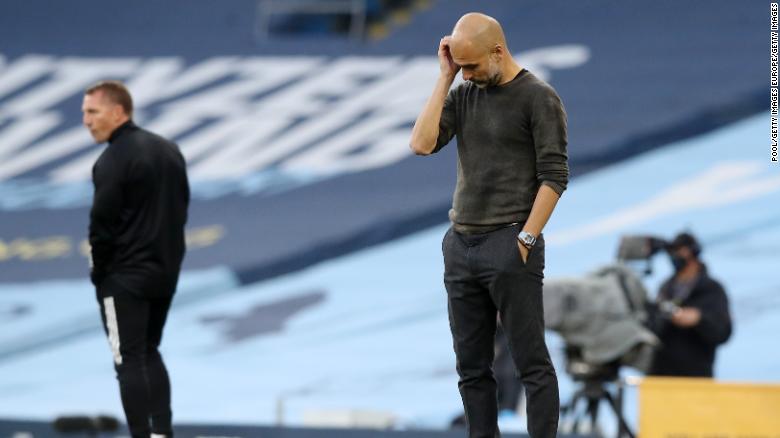 Guardiola looks dejected during the match against Leicester City.
Visit CNN.com/sport for more news, features, and videos
It was the first time in 686 games that a side managed by Guardiola has conceded five goals.
“To beat Man City you have to run like hell. So you have to have that mentality,” Leicester manager Brendan Rodgers said. “The tactical discipline was good and because of the counter press you have to get your passes off quick.
“We fell behind to a brilliant finish. We showed good composure and stayed calm and showed enough that we could cause them a problem. It was a brilliant performance and result. It has taken me 13 years to play that way. I’m very much about attacking and being aggressive. I always try to be positive but I need to think of other ways to get results in these games.”
After its first two games of the season, Manchester City sits 13th in the Premier League table.
Source: CNN
Via: EROSFM
Previous Post