0
SHARES
7
VIEWS
ShareShareShareShare
President Akufo-Addo being assisted by the Mansohene, Obrempong Sintim Poku, to cut the tape to inaugurate the facility.

All four projects were financed by the Ghana Education Trust Fund (GETFund).

The inauguration took place last Sunday, as part of the President’s tour of the region.

Also at Akyem Achiase, the President cut the sod for the construction of a 40-bed hospital for the Achiase District. 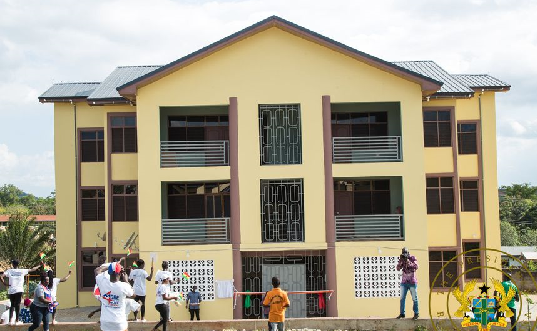 The front view of the bungalow

President Akufo-Addo was given a tumultuous welcome by supporters of the New Patriotic Party (NPP) during his tour of the Birim Central municipality and the Birim South, Akyem Achiase and Asene-Manso-Akroso districts in the region.

The enthusiastic supporters, some of who held placards with messages of support, amid drumming and dancing, lined the major streets of Akyem Manso, Batabi, Asene, Aboabo, Akyem Swedru, Awisa, Achiase and Oda to welcome the President.

President Akufo-Addo thanked the people for their massive support for the NPP since the beginning of the Fourth Republic.

He urged them to give him four more years to continue with the development projects the government was undertaking in their respective communities.

He expressed optimism of winning a landslide victory in the December 7, 2020 general election, considering the rate of development that had taken place across the length and breadth of the country, which he said was unprecedented in the nation’s history.

He, however, cautioned the electorate at Manso against voting for an independent candidate, since the candidate was not a member of the NPP.

The President introduced Messrs George Kwame Aboagye, Alexander Akwasi Acquah, Kofi Ahenkorah Marfo and Kennedy Osei Nyarko, the NPP’s parliamentary aspirants for the Asene-Akroso-Manso, Oda, Akyem Swedru and Akyem Achiase constituencies, respectively, to the people and urged them to vote for the aspirants to enable the party win majority seats in Parliament.

In response to an appeal by the Achiasehene and Tarkwahene of the Akyem Abuakwa Traditional Area, Daasebre Gyening Kantang II, for the establishment of a factory in the town, the President promised to do so through EXIM Bank financing.

On behalf of the chiefs of the Akyem Abuakwa, Akyem Kotoku and Akyem Bosome Traditional areas, Daasebre Kantang presented a ram, a Kente cloth, a pair of native sandals and an undisclosed sum of money to President Akufo-Addo in appreciation of his outstanding performance.

At Manso, the Mansohene, who is also the Benkumhene of the Akyem Kotoku Traditional Area, Obrempong Sintim Poku, commended the President for providing the young district with many development projects and promised that the people would reward the President by voting massively for him in the upcoming elections.

He, however, appealed to the President to establish a university at Manso, for which he expressed his preparedness to release land.

Among the dignitaries who accompanied President Akufo-Addo were the Senior Minister, Mr. Yaw Osafo-Maafo; the Information Minister, Mr. Kojo Oppong Nkrumah; the Minister of Food and Agriculture, Dr. Owusu Afriyie Akoto; the Works and Housing Minister, Mr. Samuel Atta Akyea; a former General Secretary of the NPP, Mr. Kwabena Adjei Agyapong, and a host of municipal and district chief executives.