The Ministry of Lands and Natural Resources has said it has facilitated a reduction in the time it takes to register a piece of land from an average of three years to 120 days in Accra and 14 days in all the other regions.

It said the initiative would help the public to overcome difficulties they faced in acquiring land, particularly in the Greater Accra Region.

Taking his turn at the Meet-the-Press series in Accra yesterday, the sector Minister, Mr. Kwaku Asomah-Cheremeh, said in the past, it could take a person applying for land title registration between 120 working days and three years to come by the document, aside from the associated costs and sometimes eventual loss of the land papers. 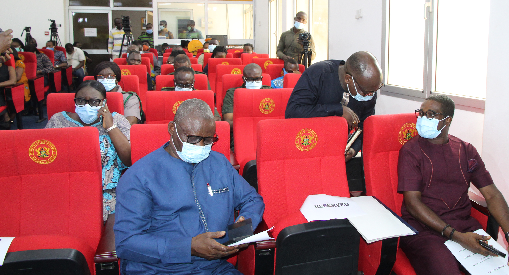 Media practitioners at the press briefing

Reason
Mr. Asomah-Cheremeh attributed the time reduction to a number of reforms carried out at the Lands Commission, including the digitisation of records and the provision of modern storage space.

“After a decade of rigorous reforms, the ministry and the leadership of Parliament have facilitated the passage of the Land Bill, which is yet to receive Presidential assent,” he said.

Its enactment is expected to streamline activities in the land market through the revision and consolidation of laws on land to ensure sustainable land administration.

The minister said it was the position of the government that land administration agencies could not continue to work manually and expect to meet the demands of the current business climate.

He said to facilitate the movement from a manual environment to a digitised one, a centre had been set up at the Lands Commission for the conversion of its records into digital formats.

“The government’s major focus on land administration is to ensure security of land tenure for the citizenry. I am happy to announce that with the aid of an ultra-modern scanner, scrutiny of all map sheets for the Greater Accra Region has been completed.

“This provides information on ownership of landed property and promotes investment and economic growth in terms of accessibility of financial capital for the development of businesses,” he said.

On job creation, Mr. Asomah-Cheremeh said the government’s Youth in Afforestation programme had, since 2017, generated 81,362 jobs.

He said interventions, such as linking youth employment to plantation development, providing alternative livelihood programmes for communities in mining areas and forest-fringed communities and the facilitation and promotion of the Community Mining Scheme, were some of the initiatives to boost job creation in a sustainable manner in the sector.

He said between 2017 and 2019, the alternative livelihood programme for the production and distribution of oil palm seedlings had benefitted 33,044 people.

“Effective June 2020, the Community Mining Scheme, which seeks to promote responsible mining in mining communities, is expected to create 126,000 jobs. About 220 youth have also been employed as mine wardens to assist in combating illegal mining,” he added.

Mr. Asomah-Cheremeh said an estimated 44,118 hectares of plantations of different species had been established by the government since 2017, together with the private sector in a move to address deforestation and provide forest goods and services.