Christmas Star 2020: What does the Bible say about the December 21 Great Conjunction?

The planets Jupiter and Saturn will come together on Monday, December 21, to form what some have called the Christmas Star of 2020. The astronomical phenomenon is officially known as a Great Conjunction and only happens once every 20 years. But the upcoming conjunction promises to be exceptional as the two gas giants will come within 0.1 degrees of each other – the closest visible conjunction in nearly 800 years.And this is not an event you will want to miss as the spectacle will not be matched again until 2080.

Because of how close the planets will come to each other, chances are they will appear as a single star-like object in the night sky.

The phenomenon has, consequently, been likened to the Biblical Christmas Star as described in the Gospel of Matthew.

Some astronomers also speculate the fabled Star of Bethlehem that led the Three Wise Men to the newly-born Jesus Christ may have been a Great Conjunction of the two gas giants. 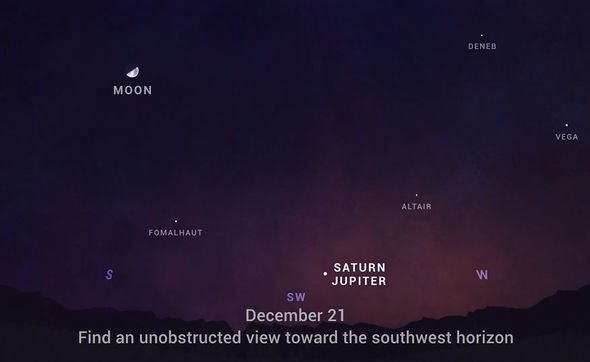 Christmas Star 2020: The two planets will come together on the night of Monday, December 21 (Image: NASA)

Astronomers at the Royal Observatory Greenwich said: “Kepler is also associated with the idea that it was the close conjunctions of Jupiter and Saturn that created the ‘star’.

“In fact, there were three conjunctions, when the two planets were close to one another in the sky, but none of these were close enough that they’d appear as one object.

“However, such an event could have been of religious or astrological significance.”

Alternative theories suggest the Christmas Star was a comet, the planet Jupiter by itself or the supernova explosion of a distant star.

There is, however, no Western record to back the latter theory, with only one possible Chinese record of a nova or supernova around the possible time of Christ’s birth.

What does the Bible say about the December 21 Great Conjunction?

As Saturn and Jupiter slowly creep closer to one another over the next few days, some Christian evangelists are touting the supposed prophetic significance of the conjunction.

In the Bible, the Christmas Star appears in the nativity story to guide three “wise men from the East” to the newly-born King of the Jews.

The Gospel of Matthew reads: “When they saw the star, they rejoiced with exceedingly great joy.

“And when they had come into the house, they saw the young Child with Mary His mother, and fell down and worshipped Him.

“And when they had opened their treasures, they presented gifts to Him: gold, frankincense, and myrrh.”

Paul Begley, a Christian evangelist and TV personality from West Lafayette in Indiana, US, believes December’s conjunction has prophetic links to the Christmas Star of 2,000 years ago.

Pastor Begley is a fervent believer in doomsday prophecies and conspiracy theories who hosts the weekly TV show The Coming Apocalypse.

He has previously explained how the conjunction links to supposed Maya prophecies about the end of the world on December 21, 2020.

In a recent broadcast, the firebrand preacher said: “What’s going on here is the celestial event is so rare they come within 0.1 degrees of each other, creating a bright star in the heavens.

“Matter of fact, so bright it’s brighter than it was the star of Bethlehem when it was a sign to the world that Jesus Christ – that the Messiah – had been born.”

Pastor Begley went on to say God has created a prophetic calendar of sorts that uses celestial alignments and astronomical phenomena to inform the world of his plans.

He said: “This is so incredible that sometimes we miss these things.

“God already knew he was gonna use these prophetic signs.”

There is, however, no consensus to back the theory the Star of Bethlehem was a Great Conjunction.

EarthSky astronomers Deborah Byrd and Larry Sessions said: “Unless some major and indisputable archaeological discovery is found to settle the question once and for all, the mystery of what the Christmas Star was will remain in the realm of faith.

“Science cannot explain it as any known physical object; history offers no clear record; and religion offers only an untestable miraculous apparition.”

To return or not to return: The dilemma of Daniel Domelevo as he resumes work today