The French president’s wife Brigitte Macron, 67, has tested negative for coronavirus, her office told Reuters on Thursday. Emmanuel Macron, 42, tested positive for Covid-19, prompting a track and trace effort across Europe following meetings between the French leader and EU heads of government in recent days.

From bows to handshakes, Reuters has explored how over time Emmanuel Macron let social distancing slip.

Once an early adopter of the coronavirus-proof ‘namaste’ greeting, the French president was showing signs of letting his guard down almost a year into the pandemic.

On Monday, three days before his office said he had tested positive for Covid-19, Macron greeted OECD chief Angel Gurría with a warm hand clasp in the Elysee palace courtyard, pulling the 70-year-old into a loose embrace, a Reuters picture shows. They were wearing masks, but Macron broke his government’s no.1 pandemic rule: stick to what the French call “barrier gestures” and avoid handshakes, hugs and kisses.

“You know them, they save lives: barrier gestures are not an option!” Macron said in a tweet on 12 July. His office did not return a request for comment about his welcome for Gurría.

Macron was always very tactile before the pandemic, sharing hugs with leaders like the US president Donald Trump and kissing and patting members of the public on the back.

In the past couple of weeks, the French leader fist-bumped EU counterparts at a summit in Brussels and greeted the EU chief Charles Michel and the Spanish PM Pedro Sánchez at the Elysee with pats on the back and elbows, TV footage shows. 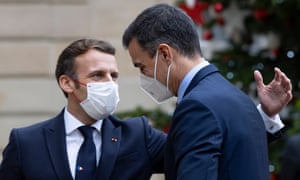 Macron also hosted a lunch at the Elysee on Tuesday with about 20 parliamentary leaders and dined with a dozen lawmakers on Wednesday, parliamentary sources said, despite his government recommending no more than six guests at the table during end-of-year holidays.

That contrasted with his careful following of social-distancing guidelines earlier in the pandemic.

In March, days before he put the nation on lockdown, he replaced the traditional handshake with the ‘namaste’ when he greeted Spain’s king and queen in Paris, pressing his palms together and bowing slightly.

He repeated this greeting with the UK’s Prince Charles on 18 June and maintained social distance outside 10 Downing Street with the prime minister Boris Johnson.

But on 28 October, when he announced a second lockdown, he included himself among those who had let social distancing slip.

“We should all have respected barrier gestures more, especially with family and friends,” he said on TV. “Is now the time for regrets?” 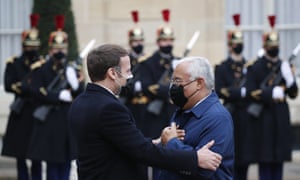 A host of European leaders are quarantining after the French president Emmanuel Macron tested positive for Covid-19 on Thursday.

Macron had attended a number of high-profile events in recent days, including the European Council summit in Brussels last week, and has received several leaders at the Elysee Palace this week.

It has not yet been determined how or when the French president contracted the virus and when he became contagious.

Among those who are now self-isolating having met Macron this week and are the Spanish prime minister Pedro Sánchez, who earlier today tested negative but will work remotely from quarantine, the European Council chief Charles Michel and the OECD secretary-general Angel Gurría.

Micheál Martin, Ireland’s taoiseach, has tested negative. He limited his contacts on Thursday while awaiting his results.

The Portuguese PM António Costa has cancelled all official trips and is isolating while he awaits test results, after attending a working lunch with Macron at the Elysee Palace yesterday.

The French prime minister Jean Castex and the parliamentary speaker Richard Ferrand are also in quarantine, their offices confirmed on Thursday.

Be moderate in jubilation – Nana Addo to NPP supporters