This week, it was reported that one in three women do not know how to access contraception, as the coronavirus pandemic has prevented them from accessing contraceptive products as they usually would.

Frontline service providers warned that an increasing number of women were becoming pregnant because they were struggling to access contraception, with leading UK abortion provider Marie Stopes stating that people in need of contraception have been “disgracefully neglected” over the past several months.

Contraception providers have also warned that women are currently being faced with a “postcode lottery” of contraceptive services, due to investment being given to services.

There are several forms of contraception that can be used to prevent pregnancy and reduce a person’s likelihood of catching or spreading sexually transmitted infections. Here is everything you need to know.

One of the most effective forms of contraception is condoms, sexual health and HIV charity Terrence Higgins Trust states, “as they provide a barrier that stops sperm, viruses and bacteria getting from one person to another”.

Condoms are the only form of contraception that both prevent pregnancies and protect against sexually transmitted diseases.

According to the NHS, external condoms, which are made from thin latex, polyisoprene or polyurethane, are 98 per cent effective when used correctly during sex. 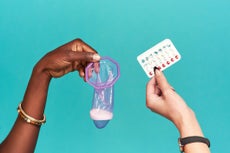 Sexual Health Week 2020: 7 of the biggest taboos for young people, according to experts

Internal condoms, on the other hand, are 95 per cent effective at preventing pregnancy and sexually transmitted diseases when used correctly, the health service states.

The NHS stresses that once an external or internal condom has been used once, it should not be used again. They should also not be used past their use-by dates.

“Always use condoms that have the BSI kite mark and the CE mark on the packet. This means they’ve been tested to high safety standards,” the health service says.

Condoms can be sourced for free from health establishments including sexual health clinics, contraception clinics and some GP surgeries. They can also be bought at pharmacies, supermarkets, from vending machines in some public toilets and online.