Full List: 65% of new lawyers called to the Gambian Bar are Ghanaians

by Eros FM
in Education, News
0

65 per cent of lawyers called to the Gambia Bar in 2021 are Ghanaian law students who left Ghana and opted to study law in the West African Country.

MyNewsGh.com can reliably report that the new lawyers, mostly made up of Ghanaians were admitted to the roll of Barristers and Solicitors of the Supreme Court of The Gambia, at a ceremony held in Banjul, the capital of The Gambia.

Out of thirty-eight (38) lawyers who were admitted to the bar in the country on Monday, twenty-five (25) of them were Ghanaians called to the Bar. The President of the Gambia Bar Association congratulated the new entrants to the Gambian Bar, urging them to cherish the name of their profession and consider doing more in the dispensation of justice.

For the new lawyers, congratulations have since been pouring in from their colleagues in Ghana led by the umbrella body of law students, the Ghana National Association of Law Students, who have been critical of the “system”.

This news will undoubtedly re-start the debate about the need for reforms in Ghana’s legal education system. Two years ago, then Chief Justice, Sophia Akuffo who was Chairperson of the General Legal Counsel, the body mandated to regulate legal education said the door to entry to law school will remain closed and tight.

This was after 128 out of 1820 students who sat for the entrance exam for entry into the Ghana School of Law that year supposedly passed. The General Legal Council (GLC) has said there is no conspiracy to admit fewer students.

The Law School Entrance Exam in Ghana is a two-hour paper that is based on about ten law courses. One of the requirements for taking the test is the completion of an LL.B and passing the full tests.

Those who are enrolled in the Law School have their own complaints beyond entry which is not being addressed, according to some who spoke to this portal.

Find below the list of Lawyers called to the Bar: 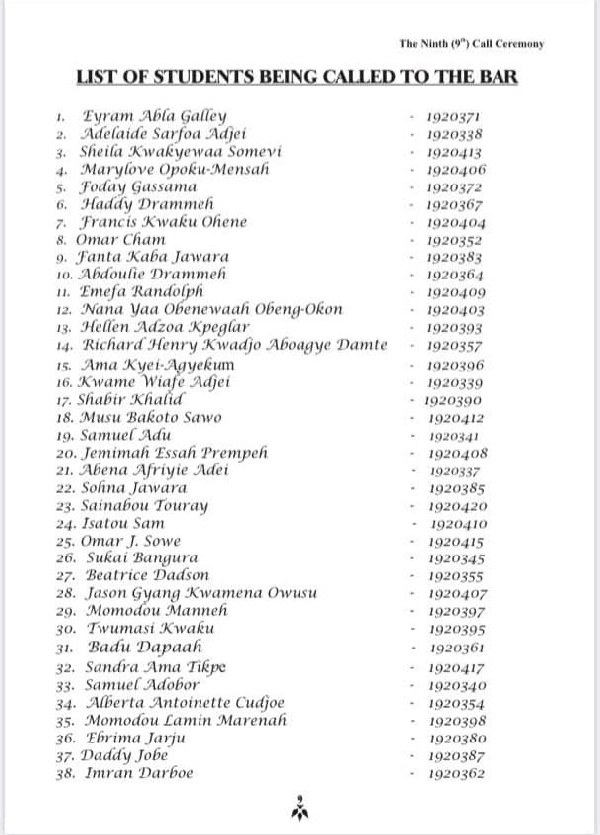