by Eros FM
in Education, News
0

Pupils of the Alezuma Basic School in the Kwahu Afram Plains South District in the Eastern Region now have the comfort of sitting in a three-unit classroom block, after over 20 years of studying under a mango tree.

The newly built structure — built with free labour by community members — also has an office, a store and a six-seater toilet for both learners and staff.

The support was initially intended to fund a pavilion as an alternative learning environment, but this was upgraded into a full classroom block when the financial support increased.

The District Education Directorate has subsequently procured new desks for the Kindergarten Department that are expected to be handed over to the school this week to support the ongoing overhaul of infrastructure and facilities.

The school, however, still needs furniture for the rest of the classrooms.

The poor state of the school, as portrayed in publications by the Daily Graphic, inspired action from the Parish Priest of the St Joseph the Worker Catholic Church at Maame Krobo, Rev. Fr Stephen Sakpaku, who mobilised and received support from a range of benevolent contributors, particularly within the Catholic Church, to bring the project into fruition.

Rev. Fr Sakpaku said the next challenge was to secure furniture for the rest of the school, and hinted that he was liaising with the Marian Global Concern at the Nunciature and the Kwahu Afram Plains South District Education Directorate to secure the desks.

The bulk of the funding for the classroom block came from the Marian Global Concern, an association of women in the Accra Nunciature of the Catholic Church that focuses its efforts on supporting women, children and education.

The Tuesday Day Born Group of the Mary Mother of Good Counsel Parish of the Catholic Church at Airport in Accra also contributed, while Rev. Fr Sakpaku also raised funds from the St Kizito Catholic Church Parish at Nima, the St Joseph the Worker Parish in Tema Community 8 and the St Dominic Parish at Taifa, all in the Greater Accra Region, from the sale of his book: Lent Companion. 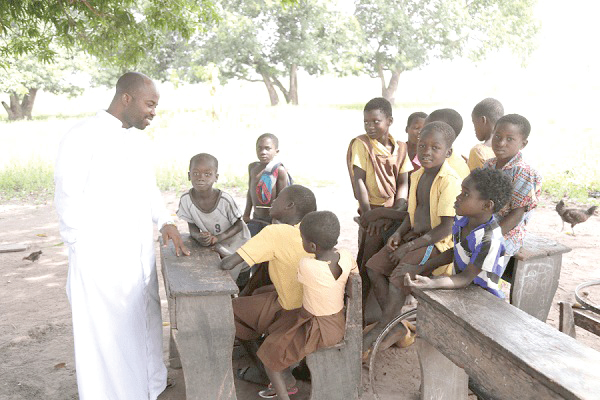 Rev. Fr Stephen Sakpaku, the Parish Priest of the St Joseph the Worker Catholic Church at Maame Krobo, interacting with some of the pupils

Rev. Fr Sakpaku explained that when the funds reached a certain threshold, he, in consultation with the community, decided that a three-classroom block was more appropriate.

“‘For lack of knowledge my people perish’,” he quoted from Hosea 4:6 in the Bible, and added that if the state failed in fulfilling its part of the social contract with the people, religious bodies could take up that responsibility and carry it out to the greater glory of God.

The Kwahu Afram Plains South Director of Education, Mr Mustapha Haruna, said the assembly had secured desks for the KG Department and was in the process of securing some for the Primary Department, too, stressing that it was a gradual process.

He expressed gratitude to Rev. Fr Sakpaku and the Catholic Church for the support they provided in the education of children in the district.

He added that when he assumed office in the district, he visited the school and saw the plight of the children and had since been in constant touch with Rev. Fr Sakpaku, who had already expressed interest in helping the children in the community.

Mr Haruna hinted that the assembly would present “a beautiful citation to Rev. Fr Sakpaku and the Catholic Church” for their contribution to education in the district.

The elated head teacher of the school, Mr Elijah Fodjour, was grateful to Rev. Fr Sakpaku and the Catholic Church for the interest shown in ensuring that there were decent classrooms for the pupils.

He said the keys to the building were handed over to him on February 9, 2021.

He hinted that he was about to embark on an enrolment drive, saying he was hopeful that within a month he would be able to mobilise the children.

The Daily Graphic publication, which appeared in the January 29, 2019 issue, depicted the sorry state of the school, which, for over 20 years, operated from Primary One to Three, with only a head teacher and two other teachers combining the classes to teach under a mango tree.

When the school was in full session, blackboards were positioned at vantage points under the tree for primaries One to Three, while pre-school children were handled under a different tree.